PIERS Morgan and the board of The Mirror newspaper allegedly sanctioned the theft of personal private bank account data for a front-page story about Diana, Princess of Wales, Byline Investigates can report.

Documents filed at the High Court in London as part of a long-running phone hacking litigation detail the raid on the bank of Major James Hewitt, with whom the Princess had a relationship between 1986 and 1991.

The claims are particularly serious as they allege directors of the board of the paper’s publicly-listed parent company Trinity Mirror fraudulently concealed their own knowledge of the theft of Major Hewitt’s bank statements.

The rules of the London Stock Exchange, on which shares in the Mirror have been traded since 1953, require high standards of conduct by listed companies in order to protect investors from unlawful business practices.

But a witness statement sworn by James Heath, lead solicitor for 71 people currently suing Mirror Group Newspapers (MGN) for phone hacking and misuse of private information – of which Major Hewitt is one – implicates the board in wrongdoing.

It reads: “The relevant articles and invoices… provide another strong example of blatant UIG [Unlawful Information Gathering] being engaged in or approved of by senior MGN executives (in this case Piers Morgan) back in 1998/9, which must also have been known to MGN’s Legal Department and the TMG Board.”

The Mirror’s publisher has yet to plead its defence to the detailed claims made against it in the statement, deployed at the Rolls Building in London earlier this month, but may do at a further hearing in mid-December, which Byline Investigates will report.

The allegations relate to 54-year-old Good Morning Britain host Mr Morgan’s time as editor of The Mirror in 1999 when it ‘splashed’ details of Major Hewitt’s bank transactions – and even his bank account number – on its pages.

The details, which included the size, time, and date, of payments to-and-from the Major’s NatWest bank account, were allegedly obtained by a notorious firm of private detectives called Southern Investigations, which specialised in illegal surveillance.

Remarkably, Mr Morgan even went on to admit in his book The Insider to having seen the confidential paperwork, boasting to Major Hewitt in a chance meeting in October 2004: “I saw your bank statements.”

In his witness statement, Mr Heath said evidence emerging in the Hewitt case showed the Mirror was using the services of one private investigator with criminal convictions for data protection offences, and another who had been investigated by anti-corruption police and murder squad detectives.

Mr Heath wrote: “(James Hewitt) was the target of a campaign of vilification against him.

“This campaign involved… instructing private investigators such as Southern Investigations and Rachel Barry (who had been convicted of criminal offences in 1997) to carry out checks relating to Mr Hewitt.

“In March 1999, the newspaper published the details and contents of Mr Hewitt’s private bank account (including the account number and various entries relating to it), which Mr Morgan later boasted that he had seen (both in his book The Insider and to Mr Hewitt himself).”

Rachel Barry was convicted of blagging ex-directory numbers and phone billing data for a number of national newspapers in October 1997 yet, it is claimed, Mirror Group Newspapers continued to use her services.

Mr Heath’s statement goes on to identify Mirror Group Newspapers’ most senior serving journalist as the commissioner of a private investigation into Mr Hewitt dated the day before the article.

Gary Jones – who first worked for Mr Morgan at the News of the World, which closed in 2011 after 168 years in print under the weight of the phone hacking scandal – went on to become his Head of News at The Mirror, before promotions to the editorships of The People, and the Sunday Mirror,  both of which continue to be mired in lawsuits for industrial scale ‘historical’ illegal hacking and pretext blagging offences.

Mr Jones was alleged to be one of “three key media contacts” for Southern Investigations, a private detective agency whose investigator Jonathan Rees had a “network of corrupt police, customs officials, taxmen and bank staff to gain valuable information”.

A few months after the bank records front page, Mr Rees was covertly recorded by anti-corruption police, under Operation Two Bridges, telling Jones “that some of what he was doing for the Mirror was illegal”.

Mr Rees was also investigated over the 1987 axe killing of his business partner Daniel Morgan in what remains one of Britain’s most serious unsolved murder cases.

Today Gary Jones is the Editor-in-Chief of the Daily and Sunday Express, another Mirror stablemate.

Mr Heath’s witness statement went on to allege: “There are a number of associated private investigator invoices, including one from Southern Investigations in the name of senior investigative journalist Gary Jones dated 15 March 1999.”

The statement also alleges that evidence of ‘UIG’ in the pages of Mr Morgan’s Mirror was so plain that its lawyers, and the board of parent company had to know some of its most profitable stories were being generated illegally.

The document also identifies The Mirror’s serving head of legal Marcus Partington, who is overseeing the company’s, as yet unpleaded, defence to the allegations, and its former top lawyer Paul Vickers – who sat on the company board as a director between June 1994 and December 2001.

It said: “Given the highly sensitive and newsworthy nature of the story, the length of the campaign, the fact that the Editor knew of the contents of Mr Hewitt’s personal bank records, and the decision to publish them in such detail notwithstanding their obviously private and sensitive nature, MGN’s Legal Department (including Mr Partington and the Group Legal Director and Board Member, Mr Vickers) must have been made aware of the existence or contents of these bank records and the fact that they had been obtained unlawfully by private investigators.”

THE INSIDER JOB: HOW MORGAN’S MIRROR WROTE ITS WAY INTO TROUBLE

THE HEADLINES were lurid – the story allegedly stolen.

The front-page piece, which extended to a two-page inside spread illustrated with a mock-up of a bank statement, was concerned with whether Mr Hewitt had received money for a book written five years previously, in 1994, by author Anna Pasternak.

The article did not suggest Major Hewitt or Ms Pasternak had done anything unlawful, or attempt to offer a journalistic public interest defence for the intrusion into Major Hewitt’s personal business, yet publicised individual transactions – and even his NatWest bank account number.

Page one of the March 16, 1999, edition of The Mirror read: “We have seen financial records charting three separate sums given to Hewitt… by Pasternak.”

And inside it openly admitted: “The Mirror has seen financial records showing she paid Hewitt £103,000 around the time of publication.

“On August 9 1994 – two months before the book launch – a £40,000 payment was made by Pasternak into Hewitt’s NatWest bank account at the Regent Street branch, central London.

“The credit came from “Miss A Pasternak” and was paid into business current account Number 26208539, opened just five days earlier.

“The second payment arrived on October 5 the same year. Again paid by “Miss A Pasternak”, it amounted to £33,000. 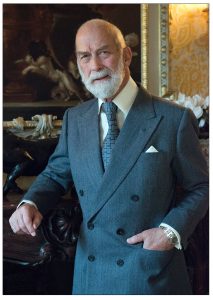