Will Lewis authorised deletion of 5.5 million emails – The day before a key meeting with the police, court documents state

THE police were not told millions of emails – which included incriminating evidence – had been deleted by News International (NI) during a key meeting with top officers, it has emerged.

The High Court was told that this mass destruction of proof had taken place on the day before the discussion with Scotland Yard took place.

One reason for the meeting was seemingly to assess how much email data there was, and how it could be searched for evidence.

However, it may have been a waste of time – because 24-hours earlier 5.5 million messages had been wiped.

This was on top of a previous purge which erased 10 million emails.

Both mass deletions had occurred, despite News International knowing they had a duty to preserve evidence.

And, after being instructed to keep documents and electronic material safe, by hacking victims who were by that time suing NI.

These are just some of the astonishing allegations being made in High Court documents deployed at a hearing last Thursday and Friday.

In Part One, of this special court report, Byline Investigates detailed claims made by lawyer Mark Thomson in a witness statement.

Mr Thomson, who has been involved in this litigation for nearly ten years, represents some of the 120 claimants still suing the The Sun for phone hacking.

Today, we reveal more allegations from that document.

The discussion was also attended by several Murdoch executives, including their head of IT who carried-out Will Lewis’s instructions to delete the emails, and a corporate lawyer who was overseeing the project.

“This was the first official briefing given to the MPS about the IT system and email archive and what data was available for searching.”

The cast of this meeting is revealing, as to its agenda:

All of these had been destroyed, after a criminal investigation had been announced, two weeks earlier.

Not to mention that 5.5 million of these emails were deleted, one day before News International were scheduled to discuss the availability of emails with the police.

There is no indication, in any of the Court papers seen by Byline Investigates, that the MPS were told at this key meeting that millions of emails had been purged the day before.

It appears, from the Claimants’ statement of case, that the police were not told of any deletions – and only found out about them several months later.

By which time, it was too late to save the back-up tapes from destruction, also.

It is alleged that Will Lewis kept the fact, that emails had been deleted, a secret from the Met Police for several months.

NI have pleaded in their defence, that the emails were scrubbed for legitimate business reasons, such as the management of high volumes, and an unstable email archive store.

But it is not clear that they, or Mr Lewis, have ever explained why they were not upfront with the MPS about the deletions from the outset.

Nor have the executives set-out, exactly why they didn’t inform investigating officers, while there was still time to stop or take permanent back-ups.

Byline Investigates has not seen any explanation given for this lack of candour by Will Lewis or News UK.

According to Mr Thomson, one detective gave the following account of what he had thought happened:

‘From 28th January 2011 to 8th February 2011 approximately 20 million emails were deleted from the Nl e-mail archives by Essential Computing (a sub-contractor) acting under NI’s direction.

‘The e-mails date from the period up to 2007, which is the relevant period for phone hacking activity.

‘This action was taken despite the fact that Nl was aware of the police investigation and of the potential relevance of the material being deleted.’

Among those accused, of conspiring in the alleged cover-up, is Rebekah Brooks, the current Chief Executive of News UK, which publishes The Sun and Sun on Sunday tabloids and The Times and Sunday Times broadsheets.

Brooks was acquitted of conspiring to hack phones and pay bribes to officials after a criminal trial at the Old Bailey in 2014.

Lewis, the former publisher of Murdoch’s influential Dow Jones, entered the race for BBC’s top job as a “wild card” to succeed Tony Hall when he steps down later this year.

However, a damaging legal document – deployed earlier this month at the High Court in London as part of a major managed phone-hacking litigation – sets out serious allegations against Mr Lewis that at present are due to be tested at a trial in October.

The papers set-out the Claimants’ case, alleging that News UK’s predecessor News International plotted to conceal and destroy evidence that it was legally required to retain.

The Particulars of Concealment and Destruction specifically claim Mr Lewis not only deliberately deleted “millions” of emails – but then permitted the wiping of back-up discs.

NGN deny or do not admit that a cover-up took place. Mr Lewis lost out on his BBC application to Tim Davie. 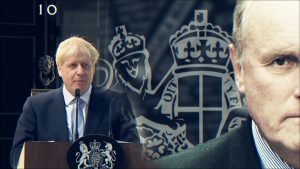