DAMNING COURT PAPERS have laid bare allegations about the lengths tabloid editors went to, in their relentless pursuit of Diana, Princess of Wales.

And nearly a quarter of a century after her death their quest to dissect her life continues unabated, and has spread to other parts of the media including TV, as revealed by the recent Martin Bashir scandal.

However, High Court papers filed by her former lover James Hewitt, have raised questions about the role of former Mirror editor, Piers Morgan in Diana’s exploitation in the public eye.

Morgan – who has been criticised for being the self-appointed moral arbiter of the Fourth Estate – famously walked off the set of his ex-show GMB in a row about Meghan Markle.

But turning his attention to Diana last week, he wrote of Bashir and the BBC: ‘They have blood on their hands because that interview propelled Diana on a path to her death. A shocking, criminal abuse of public money.’

His comments mirrored those made by Diana’s brother, Earl Spencer.

He said: “This is a young girl in her mid-30s who has lived this extraordinarily turbulent and difficult time in the public eye. She didn’t know who to trust and, in the end, when she died two years later, she was without any form of real protection.”

But whilst Morgan was in charge of the Mirror, High Court documents claim that his reporters tracked her movements.

A team of Private Investigators were allegedly tasked to follow her friends and family.

In a sworn witness statement, her former lover James Hewitt claims he was included on a hit list of Diana’s close associates.

In his court action against Mirror Group Newspapers, the former British army cavalry officer claims Morgan, ‘developed a particular obsession and vindictiveness towards him’ and ‘did so because of his relationship with the late Princess of Wales’.

He was ruthlessly stalked by photographers and reporters, and alleges that his phone calls, bills, itemised call list and communications intercepted by gumshoe detectives in the employ of the British tabloids.

The documents reveal that Morgan was himself questioned by cops after Hewitt’s car was broken into. Personal papers and diary appointments were stolen. The manuscript for his unpublished biography mysteriously disappeared.

Within days, the allegation is that stories were published in two of MGN’s national titles, based on the events that occurred and the contents of the illegally obtained documents.

Allegedly, details that could only have come from those papers, were published in the Daily Mirror and the Sunday Mirror.

‘On that evening, he (James Hewitt) had parked his car outside the new flat he had just bought for no more than an hour.

‘He walked to a public house around the corner to meet someone then returned.

‘He only subsequently discovered that his boot had been broken into and his personal items (including a manuscript of his book, some travellers’ cheques and some cash, as well as some cufflinks from Diana, Princess of Wales) had been stolen.

‘No fingerprints had been left.

‘This story of this theft was reported in the Daily Mirror on 2 October 1998, the very next day, and on 4 October, the Sunday Mirror published an exclusive story referring to the contents of the manuscript which the Claimant had been writing.

‘The stolen copy was the only version of the manuscript.’

In its defence, MGN have denied or not admitted many of the allegations and said that Hewitt did not suffer a loss of dignity as a result of the articles that were published.

‘This was consistent, in hindsight, with the unauthorised accessing of his voicemails and other unlawful information gathering techniques.

‘This included on occasion private information about the Claimant appearing in MGN’s newspapers for which there was no legitimate explanation or the fact that photographers were appearing at places or on occasions which it was highly unlikely that they could have known about other than by intercepting, or tracking the Claimant’s communications, transactions and travel arrangements.’

‘The Daily Mirror, under the editorship of Piers Morgan, carried out a campaign of vilification and harassment against the Claimant.

‘This campaign involved not only commissioning articles about him from his former lover, Anna Ferretti, who attempted, and ultimately succeeded in, the theft of the Claimant’s love letters from Princess Diana, but also instructing private investigators such as Southern Investigations and Rachel Barry (who, as the newspaper knew, had been convicted of criminal data obtaining offences in 1997) to carry out various information checks around or relating to him.’

In its defence, the MGN stated: ‘The Claimant may have been the subject of voicemail interception by journalists employed by other newspapers, which would explain the circumstances referred to, but for which the Defendant is not liable.’

Commentators have suggested that in the face of these allegations, Morgan has been hypocritical in condemning Bashir for exploiting Princess Diana and obtaining advantages by deception.

Though Bashir has not been accused of any illegality, and the police have so far declined to investigate the case, some people have said the damage he caused has been comparable to the worst excesses of Fleet Street.

One veteran BBC and ITV documentary film maker claimed there is a ‘culture of lies and deceit’ across the board, including the so-called respectable face of the British TV media.

‘Martin Bashir is no better or worse than Piers Morgan – or any other tabloid journalist….lying to get what they want,’ director Giovanni Ulleri told Byline Investigates.

‘I became aware of a growing envy of how newspapers like the News of the World, the Sunday Mirror etc got their big exclusives

‘Journalists like Bashir and others were keen to learn the arts of tabloid news gathering.

‘If the Fake Sheikh, Mazher Mahmood was criticised, then Bashir should be too.’

‘It is clear to me, thanks to the forensic Dyson report, that Bashir commissioned a forgery which had devastating consequences to the targets of those forgeries which is that direct line to Diana’s death that Prince William was making clear.’

The details of James Hewitt’s claim, which were filed in the High Court in January 2020, resulted in a confidential out-of-court settlement.

Hewitt’s papers continued: ‘The Claimant feels violated to think that journalists were listening to his messages and viewing his phone records during extremely difficult times in his life and appalled that they obtained his private medical and financial information.

‘The Claimant [Hewitt] will refer to the campaign of vilification and harassment which was conducted against him by MGN, and particularly by Mr Morgan, and the highly damaging effect which this had on him both personally and in terms of his business or other pursuits.

‘He believes that the series of articles published about his private life by MGN, and the manner in which he was depicted therein through the disclosure of personal information, had a profoundly damaging and negative effect on his private life, his relationships and his reputation and consequential career prospects.

‘The fact that private information was appearing about the Claimant, which he did not know the source of, caused him to be paranoid and to accuse all those around him including his close friends of leaking his private information. This put an enormous strain on his relationships. The fact that, as he has since discovered, they were only published because they either originated from or were verified by information obtained in this unlawful way, has caused him substantial upset. He is angry that the Defendant’s conduct and deliberate concealment of the same created this culture of distrust which caused enormous, unjustified and irreparable damage to his relationships.

‘MGN board and the Legal Department knew or were aware of the habitual or widespread use of these unlawful information-gathering activities at the Defendant’s newspapers by at least as early as 2002, and certainly by 2007, as referred to in the Generic Particulars.

‘The discovery that they knew or were aware of these activities at the time, and did not take steps to prevent, or even confess and reveal, them, but sought instead to conceal or lie about them publicly.”

Giovanni Ulleri added: “For Piers Morgan and other tabloid editors to criticise Bashir is gross hypocrisy of the highest degree.

‘What Bashir did was wrong and he deseverves everything that is coming to him. But make no mistake, the underhand tactics that he used to secure these interviews were learned behaviour direct from the modus operandi of hacks like Morgan and his ilk.’

The false tale of Meghan’s £1 damages: A case study in bad journalism

The Duchess and the tabloid: The Mail admits it’s beaten 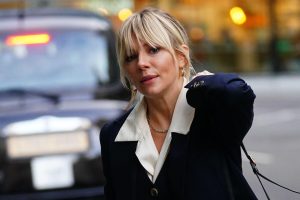