FORMER Crimewatch presenter Jacqui Hames believes that no one will ever be found guilty of the murder of Daniel Morgan.

Still unsolved, the case holds the dubious record of the most investigated homicide in British criminal history.

But Hames told Byline Investigates: “In terms of someone being found guilty, there won’t be.”

The ex-Metropolitan Police officer was speaking ahead of a new, in-depth Channel 4 documentary, “Murder in the Carpark,” which examines the conspiracy from all sides.

Hames appears in the second episode of the three-part series, to be aired next Monday night at 9 pm.

She says that the films shed new light on the affair, enabling viewers to “draw their own conclusions,” about what happened.

Morgan was murdered in a pub car park in South London 33-years-ago, and was found with an axe embedded in his head.

He had been probing police corruption, in the run-up to his death, whilst struggling to get to the bottom of shady business dealings, that were going-on behind his back.

Murky, clandestine relationships between the police, the News of the World newspaper and the criminal underworld have haunted the mystery ever since.

Five police inquiries into his murder have collapsed.

The second part of the Leveson Inquiry would have specifically looked into the interference by senior staff at the News of the World with the criminal investigations.

But it was cancelled by Matt Hancock, in 2018, when he was Culture Secretary, after a massive lobby campaign by the press industry, led by News UK.

An independent panel of inquiry is now underway, however progress has been dogged by delays, not least because of the complexity of the case and decades that have passed.

Meanwhile, the victim’s brother Alastair Morgan, has maintained a tireless crusade for justice.

He also appears in the documentary, presenting a forensic account of the events which surrounded his brother’s death, in a straightforward, easy-to-understand timeline.

Three controversial figures – who have been accused at various times of being involved in Morgan’s murder and the alleged cover-up – all spoke to the producers.

All three men have consistently denied murder, being involved in corrupt practices and interfering with the police investigations.

Hames, who is a board member at the Hacked Off campaign for an accountable press, says: “It’s a huge achievement.

“The TV producers have spent four years bringing together over thirty years of different police investigations and inquiries.

“And they’ve pulled it into a single narrative story, following the many different facets of this affair – including the police angle – without going off into too many tangents, because it is very complex.

“What you have, is the main suspects being interviewed for the first time, which is really important giving their stories on record.

“They have filmed interviews with people like Greg Miskiw, who was one of the News Editors at the News of the World, and people from the police service.

“They also have examined the most important elements of the evidence.

“No one has actually been convicted.

“So, it’s incredibly difficult to pull it all together into a conclusion, but I think people will draw their own.”

Hames’ became embroiled in the case by association, when her ex-husband David Cook was brought into investigate the most recent inquiry into Morgan’s murder.

Cook, who was a Detective Chief superintendent in the Metropolitan Police Service, was assigned to lead the case – but quickly became a target for the News of the World and their private investigators.

Hames eventually gave evidence at the first part of the Leveson Inquiry about her phone being hacked by the newspaper.

The Editor of the paper, at the time (now CEO of News UK), Rebekah Brooks, later claimed that her reporters – and the surveillance vans they hired – were trying to find out if the couple were having an affair with each other.

However, as basic journalistic checks would have established, they were actually married with children, and living together.

Ms Brooks’ statement has never been taken seriously, according to those close to the case.

“As result of him (David Cook) making an appeal on Crimewatch, for new information to come forward, the main protagonists took it upon themselves to target him, and by association, us as a family.

“Putting us under surveillance, digging around in our private lives financially, and otherwise, trying to intimidate us, tampering with our mail in order to try and destabilise David, and stop him from digging around quite so much.

“I understand they have got some phone records now, which enhances the evidence connecting the main protagonists with the News of the World and the surveillance that was put on us.

“David was followed to school and nursery.

When he arranged, to have the van that was following him stopped, by some random traffic officer, it turned out the be occupied by a News of the World journalist and photographer.

“This is where Greg Miskiw and Alex Marunchak, came into it.

“They were the ones who instigated that surveillance.”

Greg Miskiw, has since told Byline Investigates, that he was duped by his colleague Alex Marunchak into ordering the surveillance.

Marunchak, who was a senior editor at The News of the World, was a close friend of the main suspect Jonathan Rees, who ran an agency called Southern Investigations, with the murder victim, Daniel Morgan.

Marunchak was a major client, who supplied them with thousands of pounds of business in exchange for illegally acquired information from a network of “blaggers” and corrupt police officers.

“Miskiw has previously admitted to Byline Investigates to tasking convicted phone hacker, Glenn Mulcaire to do the phone hacking, and get details of our personnel records from the Met illegally.

“Effectively, it amounts to trying to pervert the course of justice, as they were trying to interfere with a murder inquiry.”

At the time, the press were enjoying a new era of good relations with the Met, under police Commissioner John Stevens, due to an “open door policy” which he introduced.

Stevens was courted by, and became a friend, of Rebekah Brooks.

“My ex-husband (David Cook) actually confronted Rebekah Brooks at a social event, at New Scotland Yard, and told her what was going on, and she said she would investigate it.

“And nothing was done. In fact, Alex Marunchak ended-up being promoted. There was silence after that.”

Brooks would later tell Parliament that she did not recall the meeting.

“There are questions, in the light of the phone hacking investigations, a further investigation is said to have been done into the conspiracy to pervert the course of justice – but nothing came of it, and I have no idea what they did in that investigation.

“The Rebekah Brooks side of everything is brushed under the carpet.

“They have decided not to go there again.

“And you have to question why there has been almost no media coverage?

“It’s a story about trust and faith in our public institutions.

“This is a story, which exemplifies how important it is for that trust, to be nurtured.

“This close relationship, between the press and Government, which is not in the interests of the public, has sought to turn our newspapers into propaganda sheets for big businessmen and politicians, who are pushing joint agendas.

“So, it’s not in the interests of the public for that relationship to continue, which is why we have the crisis of trust in the press we have today – they are just not trusted to tell the truth, they are just pushing their bosses’ agendas.

“It starts to become incestuous and people are not held to account.”

All three episodes of Channel 4’s “Murder in The Carpark” are available to watch online now at All 4. 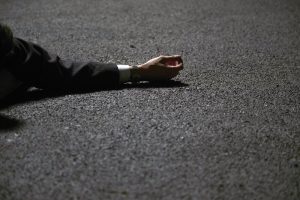