Sir Paul McCartney and Hugh Grant were on Simpson’s hit list, according to research by Byline Investigates.

The findings are derived from an in-depth analysis of the ex-Showbusiness News Editor’s bylined articles over seven years.

In Part 1 of this series, Byline Investigates revealed the identity of a Daily Mail whistleblower, who told how Simpson repeatedly made references to using unlawful information gathering. during conversations in the newsroom.

Part 2 exposed how Simpson used a notorious private investigator firm, named in the High Court as being linked to phone hacking.

In today’s third instalment, our reporters blow the lid on a criminal conspiracy at the heart Britain’s most powerful middle-market newspaper, based on the habitual targeting of its readers’ favourite celebrities.

The stars’ close associates, such as their wives and girlfriends, were also high-value, recurrent victims of Simpson’s long-term intrusion.

He spied on loved ones, in a bid to find a backdoor into the private lives of A-listers.

His stories are littered with suspicious references to phone calls and messages, that point to the use of illegally-obtained call data.

Paul McCartney’s ex-wife Heather Mills – one of the most intercepted victims in the history of the phone-hacking scandal – was singled out, over and over again.

Byline Investigates understands that the animal rights’ campaigner is now set to sue Associated News, the publisher of the Daily Mail.

The current Chairman of Associated News is Paul Dacre – but he was the editor of the Daily Mail at the time Simpson worked there.

Dacre infamously – and wrongly – told the Leveson Inquiry that phone hacking did not take place at the Daily Mail.

The phones of Liz Hurley and Jemima Khan, both former partners of Hugh Grant, were also prioritised and surveilled by Simpson.

Sources close to Hugh Grant and Liz Hurley also claim that they are putting together High Court cases.

Byline Investigates commissioned three researchers to independently analyse the stories that Simpson wrote about Paul McCartney, Hugh Grant and their partners at the time.

All three analysts found suspicious articles that they concluded were likely to be the result of unlawful information gathering.

Separately, Byline Investigates has learned that another victim of phone hacking also identified exactly the same stories as being suspicious, when he was researching his own legal claim.

He deemed that five of the nine articles were likely to have been the result of ‘mid-to-long term’ unlawful surveillance.

Researcher A’s conclusions were based on a sample of 32 stories bylined to Simpson, between October 2004 and June 2011, containing references to Grant, Hurley and Khan.

The stories contain tell-tale clues that indicate call monitoring, such as the observation that McCartney and Mills ‘regularly speak’ on the phone.

More specifically, one story reveals how a certain phone call took place on a particular night, and another describes how Heather Mills was repeatedly contacted by a named firm.

A second analyst, Researcher B, found seven articles about Mills and McCartney to be suspicious, and a further seven as possibles.

Researcher C categorised six articles about Grant and McCartney as being suspicious, including one that was ‘highly suspicious’ and another that was ‘medium level.’

One exclusive article, dated February 1, 2007 is headlined, ‘ Jemima Thrills With More Than a Hint of Hurley.’
The story contains the suspicious phrase. ‘…Liz was phoning Hugh all the time.’

The suspicious articles in the Daily Mail did not go unnoticed at the time they were published.

Ben Noakes, a former friend of Heather Mills, successfully sued the News of the World in December 2012 for hacking him in a bid to find out stories about Mills and McCartney.

News of The World reporters, and their in-house private investigator Glenn Mulcaire, hacked Mr. Noakes in May and June 2006, when they wrongly suspected he was having an affair with Mills during her divorce from the ex-Beatle.

However, when Noakes was preparing his case against NGN, he told his lawyer that he suspected the Daily Mail had also hacked his phone.

To demonstrate his concerns, he picked-out five of Simpson’s stories that he thought were suspicious.

Coincidentally, in a completely separate conspiracy, hacked product from Mr. Noakes’ phone was also being sold to the Daily Mail’s sister paper, the Mail on Sunday, via another route.

This Mail on Sunday conspiracy, which happened at the same time as Mr. Noakes was being hacked by the News of the World and when he says he was targeted by the Daily Mail, was revealed by Byline Investigates last year

A spokesman on behalf of the Daily Mail said:

‘This article is based on nothing more than the surmise of anonymous ‘researchers’. As we have said repeatedly, neither Richard Simpson nor the Daily Mail has ever been involved in phone-hacking. Mr Dacre stands by everything he told the Leveson Inquiry.’

More follows in Part 4 of our series on Richard Simpson. 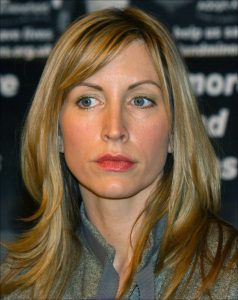