IN PART 14 OF OUR DEEP INVESTIGATION INTO CRIME AND MALPRACTICE AT THE DAILY MAIL AND MAIL ON SUNDAY, BYLINE INVESTIGATES REVEALS HOW HACKING-LINKED REPORTER KATIE NICHOLL USED PRINCE HARRY AND CAROLINE FLACK’S TELEPHONE DATA IN ARTICLES ABOUT THEIR PRIVATE LIVES. WE ALSO TELL HOW:

The paper published two articles in quick succession based around Ms Flack’s personal phone habits – and written by Katie Nicholl, a showbusiness reporter with known links to phone hackers.

In one, she revealed a brief two-month relationship between Ms Flack and Prince Harry in 2009, with the words: “[he is] constantly texting Sky TV presenter Caroline Flack.”

In the second, Ms Nicholl shows further apparently intimate knowledge of their telephone usage by telling the paper’s then two-million paying readers: “Harry is very funny and texts her jokes all the time.”

The stories also contain phrases that are today considered hallmarks of the same Unlawful Information Gathering (UIG) that has hit newsstand rivals News UK and Mirror Group with more than £1bn in victim compensation and legal costs.

Specifically, alongside the references to the Prince and Ms Flack’s phone habits, Katie Nicholl’s stories were billed as “exclusive” information that relied on anonymous sources in a journalism genre – ‘showbiz’ – that was a notorious haven for illegal newsgathering at that time.

Byline Investigates put our story to the Mail on Sunday and Ms Nicholl earlier this week. Each insists the articles in question were not the product of illegal voicemail interceptions, although offered no comment on their possible reliance on unlawfully-obtained call data.

While the focus has been on the many negative stories published about Ms Flack in the sixth months to her death, this is the first suggestion she was also unlawfully targeted by private investigators and phone hackers digging into her private life.

Since November 2019, Byline Investigates has been scrutinising the body of work Ms Nicholl produced as a reporter, columnist, and royal diarist, for the Mail on Sunday over a 14-year period.

In December last year, we revealed how Prince Harry’s private phone data – including details of his text messaging habits – appeared in a series of stories by Ms Nicholl over nine years.

Prince Harry has not sued the Mail on Sunday, but he is pursuing phone hacking cases against Rupert Murdoch’s News UK, which owns the The Sun, and against the owners of The Mirror, Reach plc.

And his wife, Meghan Markle, the Duchess of Sussex, is suing the Mail on Sunday for alleged breach of copyright, misuse of private information and data protection offences.

Katie Nicholl’s suspicious articles about Prince Harry were printed between December 2002 and July 2011.

And we can reveal the same suspicious pattern appears in two stories written about another of Prince Harry’s girlfriends, Caroline Flack, also authored by Katie Nicholl.

A further earlier story mentions a mutual friend of Ms Flack and Prince Harry, called Natalie Pinkham. Ms Pinkham too was the subject of stories by Ms Nicholl which rely on call data.

An expert hacking litigation analyst, who studied the stories carefully, told us: “There were significant hallmarks of unlawful information gathering (UIG) [in these stories].

“Of particular note, is that that UIG extended to Prince Harry’s friend Natalie Pinkham, who introduced him to Caroline Flack.”

The Mail on Sunday and The People – the Mirror-owned title recently accused of setting illegal private investigators on murdered schoolgirl Milly Dowler – simultaneously revealed Prince Harry and Ms Flack had been seen together on the April 19, 2009.

At the time, and for at least eight years previously, The People was relying heavily on the unlawful interception of voicemails and the illegal interrogation of people’s private phone billing data to source stories.

The High Court in London has heard that The People’s editor between 2001 and 2007 – Mark Thomas – was one of the most prolific and persistent phone hackers in newspaper history.

The executive team that ultimately replaced Thomas was also populated with many journalists whose careers were built on industrial scale illegal snooping.

It is not known how The People sourced its version of that story, but the Mail on Sunday insist its article is not phone-hacked.

Three months after that first article – on June 7, 2009 – Katie Nicholl wrote about the Prince and the presenter, and discussing their private communications.

The headline read: “CHELSY CAN’T WAIT TO SEE HARRY – BUT IS IT TOO LATE?”

The crux of the story was that Prince Harry was to meet ex-girlfriend Chelsy Davy at a charity event, but that he had also struck up a friendship with Ms Flack.

Almost immediately, the story references phone activity, suggesting its main supporting evidence may have been the examination of private phone billing data of the sort readily supplied by illegal private eyes to Fleet Street.

The second paragraph reads: “But friends say she (Chelsy Davy) may be too late – as he (Prince Harry) appears to have moved on and has been constantly texting Sky TV presenter Caroline Flack.”

This paragraph does not attribute sourcing, instead relying on a supposed ‘friend’ supplying information to the Mail on Sunday.

However, as Byline Investigates has previously revealed, the use of anonymous ‘friends’ quotes is a method of “washing” unlawfully obtained information.

Indeed, the phrase itself is considered by lawyers for victims of phone hacking by the Mirror, Sunday Mirror, The People, The News of the World, and allegedly The Sun, often regard the phrase as shorthand for criminality.

The second suspicious paragraph comes at the end, which states: “They are Facebook friends and message each other all the time. Harry thinks she’s cute,’ says a friend.

The headline read: “WILL HARRY JAUNT BE CAROLINE’S BIG BREAK?”

The crux of the story was a suggestion that Prince Harry and Ms Flack were getting a bit more serious because of a planned trip to Cornwall.

Like the previous week’s story, the mentions of private messages comes in the second and last paragraphs.

The second paragraph reads: “He has been wooing her with flirtatious Facebook messages and last weekend they partied together at the trendy Troubadour club in Earl’s Court before going back to Clarence House together.”

The final paragraph again uses an unnamed source, and states: ‘My source says: “Harry is very funny and texts her jokes all the time from an internet site he’s found.”

A spokesman from Associated Newspapers said last night: “We cannot put it more plainly: neither Katie Nicholl nor The Mail on Sunday have ever hacked telephones, or commissioned anyone else to.”

Last night a spokesman for Press reform group Hacked Off said: “The Mail on Sunday and other newspapers relentlessly intruded on the life of Caroline Flack, but relying on criminal activities for their coverage would show the depths they were prepared to sink to get stories on the presenter.

“Until the promised public inquiry into police, press and political corruption is established by the Government, the public won’t know the full extent of phone hacking and press illegality that occurred at newspaper titles.” 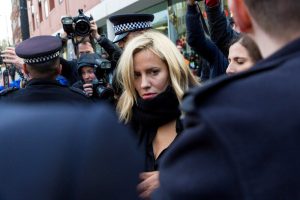