TO GLENN Mulcaire, it was just another sensitive job in a career as a private investigator built on the illegal trade in other people’s secrets.

And like every other tasking he accepted from his most lucrative client, Rupert Murdoch’s notorious Sunday tabloid the News of the World, the details went down in a notebook in biro.

But this time the job was different. The target was a 16-year-old, still three-months off sitting his GCSEs, and suspected – on the flimsiest of hearsay – of dabbling in pot and drinking underage.

Where most students facing GCSE revision might get away with youthful transgressions in relative anonymity, Prince Harry – the then fifth in line to the British throne – was afforded no such discretion.

Mulcaire’s routine was to scrawl down the name of his tasker in the top left-hand corner of his notes. On this occasion it said ‘Greg’ for Greg Miskiw, the News of the World’s shrewd and shady News Editor.

Miskiw was Mulcaire’s principal handler, and the personal newsroom hitman of Rebekah Wade (whose later married name is Brooks), Murdoch’s hand-picked choice as editor of the biggest-selling English language newspaper on the planet.

In years to follow, Mulcaire and Miskiw admitted their parts in hacking the communications of the Prince’s circle of friends and aides.

Each served time in Belmarsh, one the country’s toughest prisons, being processed after conviction, while Brooks herself was acquitted at the Old Bailey in 2014 of conspiring to hack voicemails.

But, both Miskiw and Mulcaire maintain, Brooks – who is today the Chief Executive of Murdoch’s British media giant News UK – was the real engine behind a royal hacking story that, Byline Investigates can reveal for the first time, started some four years earlier than anyone previously thought.

It was February 2001, and Brooks was obsessed with putting her schoolboy quarry on the front page for smoking marijuana and consuming alcohol underage.

At her order, Miskiw himself has told Byline Investigates, he set Mulcaire loose on the Prince’s private communications in order to try and unearth some way to prove the story Brooks so badly wanted.

Here, Mulcaire breaks his own silence to describe some of the methods he used to infiltrate Prince Harry’s friends and associates in a “fishing expedition” into his private life.

Mulcaire said: “As the lead investigator, I was tasked by Greg Miskiw to forensically gather as much intelligence about Prince Harry’s activities in the nocturnal hours, with a view to enhancing the newspaper’s ‘project’.

“The instruction was to monitor communications and to identify any references to drugs.”

Seated at a desk in his nondescript office in a south London suburb, surrounded by stacks of notebooks and job sheets and various well-thumbed pay-as-you-go ‘burner’ phones, Mulcaire started applying the tradecraft for which the paper paid him north of £100k-a-year.

“I used my own adaption of an investigative profiling technique known as the ‘MICE’ formula,” he explains.

“This stands for Money/ Ideology/ Communications/ Ego. The communications part of that is what Greg Miskiw was mainly interested in.

“It basically involved getting the billing data, the ex-directory numbers of their homes.”

Phone bills were an invaluable resource for illegal private investigations. Mulcaire got them by ‘cloning’ the identities of real mobile phone company workers and then fraudulently accessing the personal accounts of their customers.

By working through the stolen bills, looking for patterns, identifying unusual or prominent numbers, and then methodically penetration-testing their voicemail systems, it was possible for Mulcaire to build a detailed picture.

Speaking exclusively for the first time about the Prince Harry sting, Mulcaire, who has since become a whistleblower on criminality at his former employer, adds: “I think I was also listening into voicemails left by Harry and his friends.

“Under the ‘MICE’ formula, I hoovered-up all the possible data with exact precision, and reported back to Greg accordingly.”

The Harry operation came at a key time for Mulcaire, marking an important shift in his employment to becoming a full-time News of the World man.

He’d first been introduced to Miskiw through a character called John Boyall, the owner of ‘Legal and Research Investigations’, a private eye firm where Mulcaire developed his skills in espionage.

Over time, Boyall had entrusted Mulcaire with the company’s lucrative ‘News of the World account’. Dealing with Miskiw in person, they quickly built a rapport.

Gradually, throughout the year 2000 and with the encouragement of Miskiw, who always had an eye on streamlining the News of the World’s outgoings, Mulcaire started working for the paper directly “on the side”, cutting out the middle-man.

And by September 2001, as the Prince Harry ‘project’ took up more and more time, Mulcaire broke away from LRI entirely, and signed a contract to work exclusively for the paper.

Operations moved from one magnolia-painted office in Croydon five miles west to another, nested deep in an industrial estate in Sutton, Surrey, and which Mulcaire calls a “batcave” for his shadowy work.

But the approach, though highly illegal, yielded little for Brooks, who was simultaneously deploying a small army of undercover journalists and photographers to infiltrate the Prince’s life, as revealed in part two of this investigation.

“Rebekah won’t have liked the results of the fishing expedition,” says Mulcaire. “There was no evidence that Prince Harry was using drugs, soft, hard or otherwise.”

Mulcaire’s admissions are extraordinary, not least because they involve activities that long pre-date the other known period of spying on the Prince (from 2006), which led to the arrests of Mulcaire and former News of the World Royal Editor Clive Goodman, igniting the entire phone hacking scandal.

And they are emerging as Prince Harry, now Duke of Sussex, is suing Murdoch’s other notorious tabloid The Sun, along with the now-closed News of the World, for allegedly hacking his phone and concealing industrial-scale ‘unlawful newsgathering’ on a corporate level, as we first reported last year.

Mulcaire’s role was just part of a complex and wide-ranging year-long surveillance operation against the young Prince, in what was a genesis moment for a long campaign of intrusion that has led him today to the High Court in London.

As revealed in Part 1 of this ‘Triple Whammy’ series, the plot revolved around three of the most powerful and controversial figures in Murdoch’s British newspaper empire.

In the second part, we told how Rebekah Brooks bolstered her plan by involving a top Royal aide and the head of the then UK Press-watchdog the Press Complaints Commission.

And in the next instalment in this series we will reveal how Brooks used a Royal Polo trip to Spain as the pretext for another attempt to catch out the young Prince.﻿ 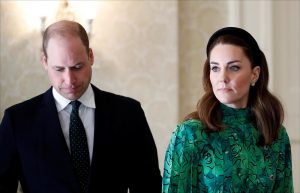