Britain’s biggest-selling mid-market newspaper allegedly targeted the Prince’s former partner Chelsy Davy with ‘unlawful newsgathering’ as it tracked her travel between South Africa and the UK in 2006.

The allegations are significant because the Daily Mail has never before been linked to a long-running litigation that has cost its newsstand rival Rupert Murdoch a minimum billion pounds sterling over the last 10 years.

“How on earth can you get flight details and seat numbers legitimately?”

But a virtual high court hearing last Friday heard its Royal Editor Rebecca English teamed up with her opposite number on The Sun – Duncan Larcombe – to pay for a private investigator to unlawfully track Ms Davy’s flying plans using pretext blagging (the obtaining of information by deception).

He said: “There is an email from Mr Behr to Rebecca English at the Daily Mail… about ‘flight Blag details’,” said Mr Sherborne, describing how Behr had commissioned “searches” of flight manifests to identify which day Ms Davy would be travelling on.

He added: “How on earth can you get flight details and seat numbers legitimately?”

It happened in April 2006, when Larcombe, then The Sun’s Royal Editor, wanted intelligence on Ms Davy’s secret travel arrangements to come and see her boyfriend in England.

For two-years the Zimbabwean heiress, at the time an Economics student at the University of Cape Town, South Africa, had been in a long-distance relationship with the Prince while he was training in England at the British Royal Military Academy Sandhurst before serving in Afghanistan.

Ms Davy was studying for her finals and due to fly in for celebrations marking Prince Harry’s passing-out parade at the officer training college before he joined his regiment, the Blues and Royals, as a second lieutenant.

The High Court hearing in Various vs News Group Newspapers heard Behr – who NGN tried initially to claim was an anonymous confidential source – disguised fees for the surveillance as part of other legitimate work he carried out for The Sun.

Behr, according to a witness statement by Claimants’ lead solicitor Callum Galbraith, was an occasional freelance journalist and middle-man supplying the illegal services of private investigators and “blaggers” to Fleet Street titles.

The court heard Behr emailed Larcombe on April 11, 2006, discussing Rebecca English and her involvement in the allegedly illegal inquiries and subsequent payments.

Reading from Behr’s email, Mr Sherborne said: “Do you want me to take the cost of the airline searches out of the two days you paid me for and bill Rebecca for half the cost so I’m partly covered?

“This time Chelsy did a strange thing. Why we didn’t pick up her booking early – she was on standby to the last minute and paid cash at the airport.”

Mr Sherborne added: “You have targets trying to protect their privacy but it is futile.”

On the day of the email, The Sun published a 303-word page-four story, bylined to Duncan Larcombe, Royal Correspondent, and headlined: “We know it’s you, Harry; Salute to Prince as he gets set to pass out.”

Alongside detail about the Prince’s itinerary, the last two paragraphs referred to flight details and private text messages.

The article read: “In the evening he (Prince Harry) will celebrate his achievement at the lavish Passing Out ball, due to take place in the academy’s grounds.

“Harry’s girlfriend Chelsy Davy, 20, has flown in from Cape Town to be at the ball.

She was given an armed escort for the first time yesterday as she landed at Heathrow – then texted Harry to say she was OK.”

The tracing of the return flight to South Africa, was allegedly already underway, with an email from Behr to Larcombe, titled “chesly (sic) return details,” which referred to “Flight blags again”.

Over the next two days, Behr allegedly performed the inquiries, and reported back to Larcombe and English, following which came an email saying: “I’ve billed Rebecca [English, Daily Mail] £200 for half the cost.”

Turning to the issue of payment, Mr Sherborne went on: “He allegedly charges The Sun £200, presumably because the Daily Mail has paid the other half.

Rebecca English, who has been at the Daily Mail for 21 years, is an influential reporter in the close-knit group of official Royal correspondents, known as “the pack”.

Her reports are syndicated around the world, and she has led the field documenting the relationship of Prince Harry and Meghan Markle.

The Daily Mail, and its parent company Associated Newspapers Ltd, have never responded to the court allegations, however the company has previously told Byline Investigates it stopped using private investigators in 2007.

NGN either denies, or “non-admits” that unlawful information gathering ever took place at The Sun, while making limited admissions about the News of the World, which was caught out hacking the Prince’s circle and the Royal Household up to August 2006.

In December 2006, Chelsy Davy was aged 21 and Prince Harry 22. The story of their relationship was an obsession for parts of Fleet Street which reported it like a soap opera.

The latest instalment centred on whether and when Ms Davy would be quitting Cape Town for a life in England.

On December 7, 2006, The Sun ran a story headlined “Chelsy’s love pad for sale; Exclusive” by Larcombe.

On the same day Behr allegedly sent another email, this time directly to English at the Daily Mail, with Larcombe copied in.

It is claimed the email contained the full flight booking details – right down to the seat number – of an unnamed South African who, Mr Sherborne says, was again Chelsy Davy.

Mike Behr wrote: “Maybe you [Rebecca] and Duncan [Larcombe] can plant someone next to her.”

Behr’s name is a recurring one in the long-running Sun hacking case. At first, The Sun – which denies any criminality – concealed his identity by claiming he was a confidential journalistic source, only to later reveal when challenged that he was a supplier of allegedly illegal private investigator services.

At a hearing in March, the court heard The Sun allegedly used him to illegally obtain Ms Davy’s private phone bills. Larcombe allegedly tasked Behr, who was later paid £570.

David Sherborne reminded the court of these earlier allegations.

“We know from looking at Duncan Larcombe’s expenses that Mike Behr was getting Ms Davy’s phone bills,” he said.

“Now we have Mike Behr’s email – the fruits of the court order,” made by Justice Mann in March, instructing NGN to provide further disclosure.

The long-running litigation, and other phone hacking-related costs, has so far drained media mogul Rupert Murdoch of an estimated minimum of £1 billion, over the last decade.

The case has been “brought to the brink” of a fully-blown trial at least once, with NGN choosing to settle scores of claims out-of-court for sometimes inflated sums beforehand, often “at the steps of the court”.

However, the owner of the Daily Mail Associated Newspapers has so far not faced any related civil claims for breaches of privacy.

Our MailBOMB investigation has, however, revealed multiple cases of suspected phone hacking and unlawful information gathering at The Daily Mail and Mail on Sunday. 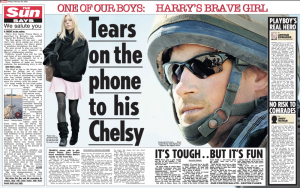